Disclosure: This post contains affiliate links, meaning we may earn money or products from the companies mentioned in this post if you purchase a product through one of our links. An example would be Amazon.

Are Septic Systems Aerobic or Anaerobic?

There are two different types of septic systems, aerobic and anaerobic, in this article we explain the difference between the two.

On-site septic systems are the most common wastewater treatment in rural and suburban areas where properties do not have access to a centralized sewer system. Conventional septic systems would typically have a septic tank and a drainfield. The septic tank is where bacteria break down the organic solids in the wastewater into simpler solids and gas, rendering the wastewater (effluent) leaving the tank cleaner than when it came. The drainfield is responsible for the final filtration before it releases treated wastewater into the ground. An Aerobic Treatment System (ATS) would appear to be similar, but is, in fact, different from a conventional septic system (anaerobic). If you are wondering if your system is aerobic or anaerobic, read on as we discuss the distinction between the two types of septic systems.

Are septic systems aerobic or anaerobic? Traditionally, most septic systems in the United States have been anaerobic. More recently, though, aerobic treatment systems have emerged in popularity. Basically, the difference between aerobic and anaerobic septic systems lies in the presence (or absence) of oxygen. Conventional anaerobic systems operate in septic tanks buried underground and in the absence of oxygen. Hence, the bacterial colonies that digest wastewater must be able to thrive without oxygen. On the other hand, although most aerobic septic tanks are also buried underground, they depend on an “aerator” which injects oxygen into the tank. Aerobic treatment systems, thus function with aerobic (oxygen-loving) bacteria. There are advantages and disadvantages to both types of systems, which we will discuss further in this article.

All wastewater that goes down your drains or flushed through the toilets end up in the air-tight septic tank. In a conventional anaerobic septic system, anaerobic bacteria thrive since oxygen is not naturally present here. The anaerobic bacteria digest the solid waste matter, leaving you with effluent that is suitable for traveling to the next major septic component: the drainfield. The anaerobic breakdown is a process where anaerobic bacteria transform solid waste into renewable energy that is usually utilized for industrial wastewater with high concentrations of biodegradable organic matter. This method is energy-efficient, requires fewer chemicals, and costs less compared to other treatment systems.

In aerobic treatment systems, on the other hand, wastewater is also collected in a septic tank, but one that is fitted with an aerator. This mechanism pumps oxygen into the air-tight tank, allowing for the survival and thriving of aerobic bacteria which take care of the digestion. As the resulting effluent leaves the tank and reaches the drainfield, more oxygen-loving bacteria get to work. As the effluent trickles downward through the ground with gravity, aerobic bacteria in the soil kill off harmful pathogens in the effluent before it joins clean groundwater. This is why your soil needs to be in good condition (suitable for percolation) and with the correct pH levels. Aerobic treatment systems (ATS) include fixed-film systems, continuous flow systems, retrofit systems, and composting toilets. The main difference between an ATS and a conventional (anaerobic) septic system is that ATS produces effluent of higher quality (cleaner) and they require smaller drain fields.

Aerobic or Anaerobic: Which is Best for You?

Are you trying to decide between anaerobic or aerobic for your home or building? Let us take a closer look at their distinctions.

As we all know, the drainfield is a component of a septic system that’s responsible for receiving partially-treated wastewater from the septic tank and for distributing it evenly to the soil through perforated pipes for further treatment. Because aerobic bacteria are able to more treat wastewater more completely, aerobic treatment systems typically require smaller drainfields than anaerobic septic systems would. Aerobic systems are thus the more space-saving choice, and maybe the best option for properties with limited space or soil that is not optimal for drainfields.

Cost-wise, aerobic treatment systems are a bit more expensive to maintain than anaerobic septic systems. Also, because aerobic septic systems contain working mechanical parts, such as the aerator, they are more susceptible to mechanical malfunction, thus would require more frequent routine maintenance. Aerobic treatment systems require power to operate, so this adds up to the monthly electricity bill.

Another advantage of an aerobic septic treatment system is that it is typically fitted with an alarm that alerts a homeowner to any problems within the system, while anaerobic septic systems commonly do not have this feature. This is important because septic problems that go undetected can quickly escalate and major septic repairs can be very costly. Bear in mind, too, that a failed septic system may require a total replacement.

There are certain property conditions under which you might actually require an anaerobic system. First of all, for an anaerobic septic system to work, the soil must be capable of effective percolation. A septic service professional can come out and perform a percolation test on your soil to see how rapidly water is absorbed by it. If the water doesn’t filter through the soil quickly enough, a traditional anaerobic system won’t be optimal. Depending on your property’s land, an aerobic treatment system may be more efficient for you. In some cases, it might be your only option.

Aerobic vs. Anaerobic: What are the Costs?

In general, installing an anaerobic septic system is simpler and therefore, less expensive. Aerobic treatment systems are a little more complex as these involve additional machinery, making it more expensive to install and maintain. Aerobic treatment systems are fairly complicated systems and have an average installation cost of $10,000 to $20,000. Meanwhile, the simpler anaerobic septic system has an average installation cost between $2,000 and $6,000.

When installing and maintaining an on-site waste treatment system, prepare for the following universal costs. Site evaluations and permits may cost you between $200 and $400. You will need to have your system inspected and pumped by a septic service provider once every three to five years (on average), which has an average cost of $200. Septic tanks themselves can cost anywhere between $500 and $2,000 depending on the size and make of the tank. Piping and other incidental materials may cost anywhere between $100 and $200.

Specifically, aerobic septic systems require aerobic bacteria so expect to spend for an air pump to aerate the septic tank to promote the population of aerobic bacteria and facilitate the breakdown of waste matter. Though total costs can vary depending on system size, soil conditions, and location, aerobic system setups tend to be more complicated (thus expensive) than their anaerobic counterparts. Aerobic treatment systems may require motor and alarm replacements periodically. Motor replacements may cost you around $500 to $600 while timers or alarms have an average cost of $100.

Anaerobic septic systems rely on anaerobic bacteria to break down waste material. Anaerobic bacteria will not require aeration and costs for such systems will vary based mainly on system size, location, and soil conditions. An anaerobic septic system comes with an average cost of $2,000 to $5,000. However, areas with higher labor rates and equipment/material costs may cause prices to rise anywhere between $4,000 and $15,000.

Finally, finding the right septic service professional to install and maintain your aerobic or anaerobic septic system will, of course, add to overall costs. Remember, though: this is NOT an area to cut corners on. Everything needs to be done right.

Converting from Anaerobic to Aerobic

Basically, a conventional anaerobic septic system is a lot simpler than an aerobic treatment system. A conventional (anaerobic) septic system usually consists of a single septic tank that could be divided into multiple chambers. Aside from regular pumping, there is no high-level operational requirements for an anaerobic septic system. An aerobic treatment system likewise mainly consists of a single tank that is divided into multiple chambers, but the main difference is that an aerobic treatment system requires a method for introducing oxygen into the wastewater. This means additional equipment are needed such as mixers, air compressors, and media that make electrical power and additional maintenance necessary to function. If you are planning to convert your septic system from a conventional anaerobic to aerobic, you have two possible options in doing so:

Option 1: Additional Equipment. There are mechanisms available that can be installed in a septic tank to convert it to an aerobic treatment process. These would typically consist of an air compressor, some tubing, and a diffuser. By introducing air into an otherwise dormant tank, however, the solid waste matter that would normally be settling to the bottom would now be swirling around the tank. This will require a settling compartment right below the compartment that receives the aeration. If you have a septic tank with multiple chambers, add air to the first compartment and use the second chamber for settling. Keeping a single chamber septic tank despite aeration will likely cause too many solid waste matter to pass out of the tank and travel to the drainfield where clogs can develop. It is also recommended to add beneficial microbes once the aeration system is installed. By adding the microbes, you are somewhat “jump-starting” the population of aerobic bacteria which will treat the wastewater in your aerated system.

Option 2: Total Replacement. Replacing your conventional septic tank system with an aerobic treatment system is, expectedly, the most expensive route. Though, it will be most effective, take note. By replacing the entire system, you can be sure to get a septic tank that’s specifically designed for aerobic treatment. You can also opt for additional components that enhance the quality of the water going in and out of the treatment system based on your property’s requirements.

Should you decide to make the conversion, keep in mind that this DOES NOT address the drainfield and any drainfield issues there may be. If you have a clogged or damaged drainfield, it will have to be addressed separately. In other words, simply converting from conventional anaerobic to aerobic treatment will not fix a failing drainfield.

Both anaerobic and aerobic septic systems are vital for breaking down waste in wastewater treatment and disposal. The important thing to consider would be the different types of microbes at work between these two septic system types. Since aerobic and anaerobic bacteria do so much in the whole process, it’s essential that you do all you can to ensure that these microorganisms thrive, regardless of the type of wastewater treatment system it is you have. Natural, biodegradable, and septic-safe products are always most recommended while avoiding the use of anti-bacterial agents, bleach, ammonia and other harsh chemicals because these can kill the good bacteria in your septic system.

link to How to Find a Septic Tank?

How to Find a Septic Tank? If you are the owner of your house, you should know the location of the septic tank in your property. In case, you do not own the property, you will still have to be...

How Far Apart Are Septic Tank Lids Septic tank lids are located a little distance from one another. Generally, there are two lids in the case of large septic tanks. The lids help to open the...

By submitting your contact information, you understand and agree that you may be contacted by up to four independent service providers and/or partners regarding your home service request, using email, telephone or text messaging-including through auto-dialed and/or prerecorded calls or messages- to the telephone number provided above, which may include your mobile telephone number, if provided. You understand that consent is not a condition of purchase. Please note that this website connects consumers looking for septic services with a network of independent service providers. It does not provide direct home repair or maintenance services. 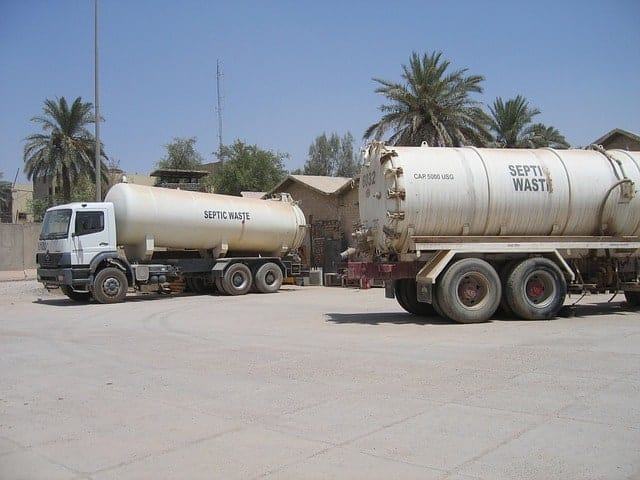 Looking for someone to help service your septic tank system? Fill out the form to get an estimate.